Late in the evening on February 2nd 2017, S.C, (an experienced CCR diver) was sitting in the living room in Beer Sheva (Israel) when a sudden thump from the study alerted his attention. As he was making his way towards the room, a huge blast knocked him off his feet, ripping frames and shattering glass windows and doors all over the apartment. ,

A fire that followed engulfed the study destroying valuable diving gear including an O2ptima CCR system and two scooters, the rest of the gear stored in the study was also damaged beyond repair.

With the fire extinguished fire fighters and police left the scene. S. C. began assessing the damage and trying to figure out what led to the explosion. Assuming that his CCR somehow fell to the floor from a height of about 70cm starting the chain of events, he went over the scene. ,

Among the first things he noticed was the Oxygen valve still attached to the cylinder's neck deeply embedded in the door. .

The neck itself separated almost symmetrically from it's Catalina cylinder body. .

The valve was ripped apart as was the first stage attached to it. The thread section of the valve is yet to be found. (it most likely melted down from the intense heat) ,

While the actual cause is yet to be determined, a logical assumption is that the blast occurred when the cylinder attached to the fully assembled CCR system hit the floor as the CCR fell from a stand on which it placed on. The cylinder is a Catalina S 3000 recently inspected and approved.

Several cases have been recorded in the past in which an internal oscillation (between the cylinder and valve thread) generated by impact, caused similar explosions with both Oxygen and Nitrox. some with cylinders that were standing upright on the floor. The moral of this story is one : , 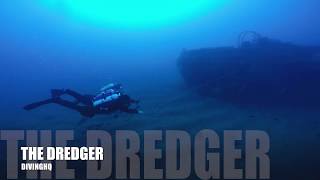